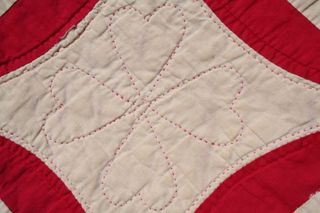 Detail of Lillian T. Jenkins Red and White Quilt, circa 1953. The quilt was featured in a Jacksonville AL heirloom quilt show and is in the family of her grandson, my husband. 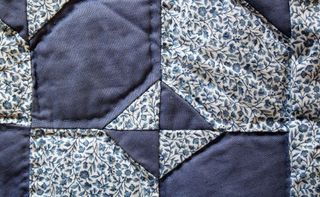 Sewing as Metaphor for Writing: Emily's Dickinson's "Don't Put Up My Thread and Needle"

Women writers have used metaphors of sewing and embroidery to represent creativity in all forms. Alice Walker’s "In Search of Our Mother’s Gardens" is one popular example. When I teach the labyrinth of Lady Mary Wroth's Crowne of Sonnets, I remember a fellow student in a Princeton seminar joking that Wroth may have "cross stitched" her second part of Urania after the published first part it was summarily withdrawn from circulation. (It borrowed fictional characters from real people at court. Where would scholarship on Wroth be, without the dedication of Josephine Roberts and her associates who finished the work of publishing Part Two?) In graduate school, Agnes Smedley's crazy quilt metaphor in Daughter of Earth made a deep impression upon me. Her character remembers especially how her mother's crazy quilt fascinated her in her youth then justifies her literary goal: "I shall gather up these fragments of my life and make a crazy-quilt of them."
Emily Dickinson has a remarkable poem that is rarely part of the short list that gets anthologized. Not many scholars have commented upon it. In Personae and Performance (1988), Elizabeth Phillips discusses the poem in the context of Dickinson's eye problems. In a footnote, she corrects David Porter for having no familiarity with "fine needlework, smocking, or embroidery": the dotted dot, she asserts, cannot be mere invention in words. The poem can be read as deeply autobiographical, painfully poignant, yet playful in the way it connects sowing and sewing. It also establishes, in metaphor, how Dickinson saw herself as poet. In fact, the sew and sewing of all the printed editions of the poem since it appeared in 1929 are assumptions by the first editors that she must have meant sew for sow and sewing for sowing are in the manuscript edition of the poem. This is the Wiki public domain rendering of Johnson 617 / Franklin 681 with bracketed insertions indicating where sow is indicated by the manuscript version, from the Manuscript Books' publication of Fascicle 32:

I think this is not one of Dickinson's famous lapses (yes, there are places where she confuses its and it's). Linked with the image of the furrow, the double entendre of sew/ sow is apparent. The poetic statement is such a poignant admission of eyes failing their tasks, yet she affirms her determination to make things more perfect. (My mother-in-law told stories of her mother's quilting parties: After all her fellow stitch partners had left, she undid the imperfect seams of others and re-did them to her satisfaction.) At the same time there is the powerful determination to dream the continued practice of stitching more perfectly, despite the failing eyes.
So, what is the imagined "dotted dot"? If we consider that it is the infinitesimal point of gathering the thread to the fabric, the prick of the needle with thread that makes the grasping just enough to hold but barely discernible to the eye, we have both the perfectionist and the diminutive self-image that Dickinson portrays. She promises to make, when her eyes are better or her craft perfected, those "tucks" that are so "dainty" that even though they are interspersed throughout, they are virtually imperceptible.
Five other times Dickinson uses the word dot in her recorded poetry, according to the Emily Dickinson Lexicon at Brigham Young University. The most famous is the ending of "Safe in their Alabaster Chambers, where the "meek members of the Resurrection" become "Soundless as Dots, / On a Disc of Snow."
Just at the time I was planning this post and researching Dickinson's vivid poem, I discovered the blog of Margaret Renkl. She, too, like Dickinson, like me, has the lazy eye astigmatism, uncorrected in childhood. See her post of October 2017. "Seeing" in her blog that takes its name from a different Dickinson poem:

The link has been made inactive, but look for this essay in Margaret Renkl's book, Late Migrations, pp. 103-105.

Elizabeth Robins 1862-1952: Actress, Novelist, Feminist
Publishing in journals and with academic presses.
The Alaska-Klondike Diary of Elizabeth Robins 1900
Contains a chronology of Robins' life.
Contributor to Modern Drama by Women 1880s-1930
Elizabeth Robins' play Votes for Women is the contribution from Britain to this international anthology.

Inside a Corner of Escher's "Relativity"
Published in Comstock Review